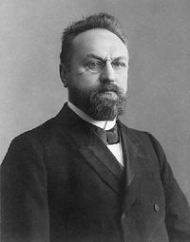 In vol. 3 of his Reformed Dogmatics (Gereformeerde Dogmatiek), Herman Bavinck (1854-1921) discusses man’s guilty conscience as a subjective witness of man’s fallen nature, in addition to God’s objective witness and verdict in the divine law:

“There really is a divine curse resting on humanity and the world. It is impossible to interpret life and history in light of the love of God alone. At work throughout the creation is a principle of divine wrath that only a superficial person can deny. Not communion but separation prevails between God and humankind; the covenant has been broken; God has a quarrel with his creatures. All stand guilty and punishable before his face (Matt. 5:21-22; Mark 3:29; James 2:10). The whole world is accountable to God (Rom. 3:19); it is subject to divine judgment and has no defense.

Subjectively this is confirmed by the divine witness in the conscience of every human being. Guilt and the consciousness of guilt are not the same. Those who try to deduce guilt from the consciousness of it block themselves from understanding guilt in its true significance and gravity. Ignorance can to some extent excuse sin (Luke 23:34; Acts 17:30), just as conscious and intentional violation aggravates sin (Luke 12:47; John 15:22; 9:41). But there also exist sins that are hidden from ourselves and others (Ps. 19:12), and also sins of ignorance are culpable (Acts 17:27-30; Rom. 1:19-21, 28; 1 Tim. 1:13-15). Yet objective guilt is more or less firmly reflected in the human consciousness. Immediately after the fall, the eyes of Adam and Eve were opened, and they discovered that they were naked. Implied here is that they knew and recognized that they had done wrong. Shame is the fear of disgrace, an unpleasant and painful sense of being involved in something wrong and improper. Added to shame was fear before God and the consequent desire to hide from him – that is to say, the human conscience was aroused.  Before the fall, strictly speaking, there was no conscience in humans. There was no gap between what they were and what they knew they had to be. Being and self-consciousness were in harmony. But the fall produced separation. By the grace of God, humans still retain the consciousness that they ought to be different, that in all respects they must conform to God’s law. But reality witnesses otherwise; they are not who they ought to be. And this witness is the conscience. […] [The conscience] is proof that communion with God has been broken, that there is a gap between God and us, between his law and our state. This is clearly evident when our conscience accuses us. But also when in a given case it excuses us, that is, keeps silent, that separation from God underlies it (Rom. 2:14-15). The human conscience is the subjective proof of humanity’s fall, a witness to human guilt before the face of God. God is not the only accuser of humankind; in their conscience humans condemn themselves and take God’s side against themselves. The more precisely and meticulously the human conscience functions, the more it validates God’s idea of humans in Scripture.”