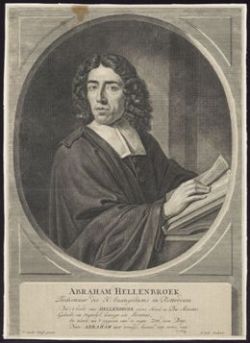 Abraham Hellenbroek (1658-1731) was a Dutch Nadere Reformatie theologian and close friend of the more well-known Wilhelmus ‘a Brakel. His most influential work was his Exhibition of Divine Truths (Voorbeeld der godlyke waarheeden), a catechism for the youth. As with the Heidelberg Catechism, Hellenbroek’s work is aimed at the spiritual state of catechumen (i.e. it is personal) rather than merely objective theological knowledge. In the Dutch Reformed Church of South Africa (Nederduitse Gereformeerde Kerk), it became the only official catechism book between 1806 and 1824, until the first Synod in 1824 reinstated the Heidelberg Catechism. Below is an excerpt from the work in which Hellenbroek concisely expounds the doctrine of predestination:

Question 1. Hath God also decreed who shall be saved, and who not?

2. How is that decree termed?

Predestination, or fore-ordaining; Rom. viii.30; whom he did predestinate, them he also called.

3. How many parts or acts of God must we therein distinguish?

Two: election and reprobation; 1 Thess. v.9; God hath not appointed us to wrath, but to obtain salvation by our Lord Jesus Christ.

4. When was this decree of election formed?

From eternity: Eph. i.4; as he hath chosen us in him before the foundation of the world.

5. Is this universal; are all men elected?

No: the smallest number; Matt. xx.16; many are called, but few chosen.

6. Has it respect to individual persons known to God by name?

7. For what reason hath Christ elected the one and not the other?

Only for his free and sovereign pleasure: Rom.ix.18; he hath mercy, on whom he will have mercy, and whom he will, he hardeneth.

8. Is it not then by reason of a foreseen faith, or good works?

No: it is not of him that willeth, nor of him that runneth, but of God that sheweth mercy; Rom.ix.16.

9. Is there no severity or injustice in this?

Not at all: for God might justly have suffered the whole race of men to perish in sin.

10. Is this election changeable?

No: it is unchangeable; Rom.ix.11; that the purpose of God according to election might stand.

11. Will it hence follow that it is a matter of indifference how we live and act?

By no means: for God hath decreed the means as well as the end to be obtained by them.

12. But if an elect person should refuse to use the means?

That is bare supposition: for God gives them a hearty desire to, and willing delight in the use of means.”