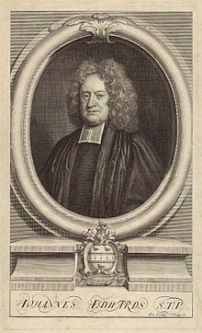 In a broader discussion on and defence of the doctrine of the imputation of the sins of the elect to Christ on the cross, John Edwards (1637-1716) cites Christ’s behaviour before his tribunal as pointing to and affirming this doctrine, particularly Christ’s silence in the face of the multitude of accusations against him. This excerpt is from his The Doctrin [sic] of Faith and Justification set in a True Light, p. 269-271:

I argue further [for the imputation of our sins to Christ] from Christ’s behaviour, and first from his deportment before his judges: when he was arraign’d and indited, and when the witnesses produced their testimonies against him, he took no notice of their accusations, and never endeavour’d to clear himself of them, but behaved himself like a guilty person.

When he was brought before the Sanhedrin, whereof Caiaphaswas the chief and president, who provoked him to speak for himself, and with a more than ordinary emotion and concernedness, arose from his seat, and said unto him, Answerest thou nothing? What is it that these witness against thee?(Matt. 26:62). It is expressly recorded that Jesus held his peace(v. 63). And when he was led from Caiaphasto Pontius Pilate, his behaviour was still the same: when he was accused of the chief priests and elders,(who belonged to the Sanhedrin, and had sent in their depositions and accusations which they had taken against Christ, when he appeared before Caiaphas) he answered nothing(Matt. 27:12). And tho’ Pilate(as Caiaphashad done before) blamed him for his silence, and smartly accosted him after this manner, Hearest thou not how many things they witness against thee?(v. 13), yet he was not in the least moved to make any apology for himself, he answered him to never a word(v. 14). And a third time, that is, when he was brought before Herod, ‘tis particularly recorded, that he answered nothing(Luke 23:9).

The reason that is generally assign’d by divines of this profound silence is that our Saviour knew, that the false witnesses wou’d say what they pleased against him, and therefore it was to no purpose to make his defence: and his enemies were resolved to take away his life: and besides, he was willing to lay it down, for this was the design of his coming into the world. But it may easily be answer’d to this, that tho’ Christ knew that his enemies resolv’d to pursue him to death, and to that purpose would produce witnesses to say and swear any thing against him, and tho’ he came to lay down his life for the elect, yet these things were not inconsistent with his pleading for himself, and asserting his innocence in open court, where his silence might be interpreted to be no other than a confession of his guilt, and a confirmation of the truth of all that the witnesses alledged against him.

Wherefore I conceive there was a higher reason of this our Lord’s behaviour: he acted thus to let us know that he bore our sins, that he took upon him our guilt. It is certain that if he had pleased, he could have confuted and baffled his accusers in the face of the court, he could have struck all his witnesses dumb. And indeed the charge that was brought against him was easie to be repell’d, because of its weakness and improbability, and the apparent malice that was discernable in it. So that he had then a just and fair occasion to baffle the suborned witnesses, and to clear his own innocency in the face of the world, especially when his disciples and all that before shewed respect and kindness to him forsook him, and one of them solemnly denied him. Yet he rather chose to be silent, and to suffer both witnesses and judges to insult him: and he did not shew himself concerned at all to defend his innocence, and to reply to the accusations which were brought against him. Yea, and which is very remarkable, tho’ he was free to answer to any otherquestions that were put to him (as we read in the history of his trial) yet as to the crimes alledg’d against him by his accusers, he was pleas’d to answer nothing.

This strange and wonderful silence at such a time I cannot but attribute to the cause before mentioned [i.e. the weight of guilt that was Christ’s by imputation]. Christ having undertaken to appear in our stead, there was to be a mutual exchange of conditions. He answer’d nothing, because we have nothing to answer for ourselves, when accused by the law of God. Tho’ he had no sin of his own, yet he substituted himself in our room, who were guilty of all sins, and accordingly he appeared as guilty, he stood silent when he was accused. Wonder not at it when you remember that he was to be in the likeness of sinful flesh, and was to assume our transgressions, and to be reckon’d a sinner. This carriage of our Lord was foretold by the evangelical prophet (Isa. 53:7) he opened not his mouth, he stood silent before the tribunal. Which is mention’d again in the same verse, to let us know that it is of great significancy and importance: As a sheep before her shearers is dumb, so he opened not his mouth. Which unexpected and extraordinary behaviour of Christ I cannot resolve into any thing but his susception of our sins upon himself, and his designing by this action to convince us that he was a reputed sinner.