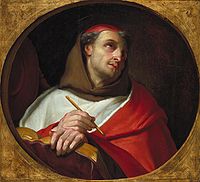 In his Breviloquium, Bonaventure (1221-1274), the great medieval Franciscan theologian and Doctor Seraphicus (“The Seraphic Doctor”), offers a succinct description of the doctrine of the Holy Trinity. The parts in brackets I have added for the sake of clarity. This excerpt is from Part I, Chapter 3:

PART I, CHAPTER 3 – ON THE RIGHT UNDERSTANDING OF THIS FAITH

This is what we must hold if we would rightly understand faith in the Holy Trinity.