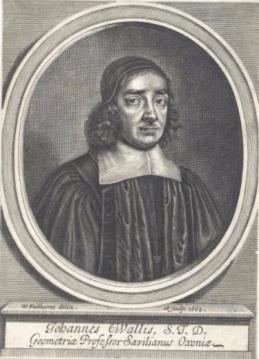 John Wallis (1616-1703) was an English mathematician and divine, who served as the Savilian Professor of Geometry at the University of Oxford for 54 years from 1649 until his death. Wallis, the most important English mathematician prior to Isaac Newton, is most well-known for his contributions to the development of calculus, geometry, and trigonometry, as well as for serving as the chief cryptographer of the Parliamentarian party. A Puritan at heart and of Presbyterian conviction, Wallis served as a non-voting scribe at the Westminster Assembly and published quite a few theological works, his sermons being noteworthy among these.

On 25 February 1696, Wallis received a letter from an unknown “Anti-Paedo-Baptist”, signed merely with the initials “C.C.”, to which he replied three days later with his A Defence of Infant-Baptism. His response is very edifying and full of “notable quotables”, but here I merely quote a few passages from early on in his discussion (p. 12-16) to serve as an appetizer (some spelling modernized):

“…the children of Christians now, have as well a right to be reputed members of the Christian Church, as the children of the Jews of the Jewish Church; and consequently to be solemnly received into it: that is, into God’s visible Church, both of them; and both a like obligation to be offered and dedicated to the service of the True God.

And it is not reasonably to be supposed, that God would so often, and so emphatically make promises to the righteous, and their seed, if there was not somewhat of peculiar preference intended them, beyond those of the wicked, or those that are out of God’s visible Church. […] Otherwise, Christ’s coming would render the condition of children worse than before … [which is] contrary to what Christ seems to intimate, in that of, Suffer little children to come unto me, and forbid them not, for of such is the Kingdom of Heaven. Which intimates a capacity in children of an interest in heaven hereafter, and in the visible Church here (especially if by Kingdom of Heaven be here meant, the Gospel Church).

As likewise to that of, Else were your children unclean, but now are they holy. Which implies a certain holiness, as to the children of one, though not of both believing parents; which they would not have, if neither of the parents were believers. Which seems to me so clear an evidence of some relative holiness, or interest in the visible Church, or dedication to the service of God, as is not easy to be avoided.”

“The right of believers’ children to be within the Church is not a new institution (as if we should now look for a distinct institution of infant-baptism, beside that of baptism), but as old as Adam, for ought I know; but the solemn rite of admission into this Church (to which the child hath a right to be admitted) is a new institution; then by circumcision, appointed to Abraham; and now by baptism, upon a new institution appointed by Christ.

Nor is it only a privilege of the children (to be thus early admitted into the visible Church, with the benefits thereto appertaining, and thus dedicated to the service and worship of God), but a duty of parents, and other superiors, thus to dedicate them, and (so far as in them lyeth) give them up to God. And we need not doubt, but that the parent hath a natural right over the child of so doing.

And we do not know how soon the effect of such dedication (upon God’s acceptance) may operate. Samson, before he was born, was devoted by Manoah to be a Nazirite. And Samuel was, by his mother, vowed before he was born, and after presented while an infant to the special service of God. Jeremy [i.e. Jeremiah] is said to be sanctified from his mother’s womb; and Paul likewise; and John the Baptist, while yet unborn; and Timothy, from a child.

And we have no reason to doubt, but many children very early, and even before their birth, may have the habits of grace infused into them, by which they are saved, though dying before the years of discretion. My meaning is, that God may, by his grace, so predispose the soul to an aptness for good, as (by our natural corruption) we are supposed to be habitually inclined to evil, though not yet in a capacity to act either.

And we may have encouragement to expect, or hope for, such work from God on the heart of a child, from our early devoting him to God’s service. And the proper way, by Christ appointed, for thus devoting or offering up persons to God, is baptism into the Name, and to the service of the Father, Son, and Holy Ghost.”