“God wills that man be occupied. Prior to the fall He called him to an enjoyable task, and after the fall, to a difficult task. It is His will that everyone be faithful in the calling to which He has called him. Some callings are of a temporal nature, whereas others have a spiritual dimension. Even if a calling is of a temporal nature, this neither detracts from nor contributes to the spirituality of one’s service of God in the discharge of this calling; rather, such spirituality is contingent upon the spiritual state of the individual as well as the manner in which he engages himself in his calling. A natural man deals even with spiritual matters in a natural manner which is not pleasing to God. The spiritual man, however, deals even with temporal matters in a spiritual fashion. He views his encounter with them as a dispensation of the Lord, embracing them as the will of God. He performs his temporal obligations in willing obedience as a service to his God, having God’s glory as his objective.”

“O grace! O amazing grace! To see a prince entreat a beggar to receive an alms would be a strange sight; to see a king entreat the traitor to accept of mercy would be a stranger sight than that; but to see God entreat a sinner, to hear Christ say, ‘I stand at the door and knock,’ with a heart full and a heaven full of grace to bestow upon him that opens, this is such a sight as dazzles the eyes of angels. What sayest thou now, sinner? Is not this God rich in mercy? Hath not this God great love for sinners? Nay, further, that thou mayest not have any ground to doubt that all this is but complementing, thou hast also here declared that God hath made his Christ ‘to be sin for us, who knew no sin, that we might be made the righteousness of God in him.’ If God would have stuck at anything, he would have stuck at the death of his Son; but he ‘delivered him up for us’ freely; ‘how shall he not with him also freely give us all things?’

But this is not all. God doth not only beseech thee to be reconciled to him, but further, for thy encouragement, he hath pronounced, in thy hearing, exceeding great and precious promises; ‘and hath confirmed it by an oath, that by two immutable things, in which it was impossible for God to lie, we might have a strong consolation, who have fled for refuge to lay hold upon the hope set before us’.” 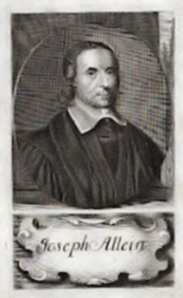 In an earlier post, we looked at the question “How do I know I am of the elect?”, and Heinrich Bullinger’s reply to this question.

Here, Joseph Alleine (1634-1668) gives a similar answer to this question to Bullinger’s:

“You begin at the wrong end if you first dispute about your election. Prove your conversion, and then never doubt your election. If you cannot yet prove it, set upon a present time and thorough turning. Whatever God’s purposes are (which are secret), I am sure his promises are plain. How desperately do angels rebel! ‘If I am elected I shall be saved, do what I will. If not, I shall be damned, do what I can.’ Perverse sinner, will you begin where you should end? Is not the word before you? What says it? ‘Repent and be converted, that your sins may be blotted out’ (Acts 3:19). ‘If you mortify the deeds of the body you shall live’ (Romans 8:13). ‘Believe and be saved’ (Acts 16:31). What can be plainer? Do not stand still disputing about your election – but set to repenting and believing. Cry to God for converting grace. Revealed things belong to you; in these busy yourself.”

“547. We know God only by Jesus Christ. Without this mediator, all communion with God is taken away; through Jesus Christ we know God. All those who have claimed to know God, and to prove Him without Jesus Christ, have had only weak proofs. But in proof of Jesus Christ we have the prophecies, which are solid and palpable proofs. And these prophecies, being accomplished and proved true by the event, mark the certainty of these truths and, therefore, the divinity of Christ. In Him, then, and through Him, we know God. Apart from Him, and without the Scripture, without original sin, without a necessary mediator promised and come, we cannot absolutely prove God, nor teach right doctrine and right morality. But through Jesus Christ, and in Jesus Christ, we prove God, and teach morality and doctrine. Jesus Christ is, then, the true God of men.

But we know at the same time our wretchedness; for this God is none other than the Saviour of our wretchedness. So we can only know God well by knowing our iniquities. Therefore those who have known God, without knowing their wretchedness, have not glorified Him, but have glorified themselves. Quia… non cognovit per sapientiam… placuit Deo per stultitiam praedicationis salvos facere.[I Cor. 1. 21. “Which… by wisdom knew not… it pleased God by the foolishness of preaching to save them that believe.”]

Thus without the Scripture, which has Jesus Christ alone for its object, we know nothing, and see only darkness and confusion in the nature of God and in our own nature.”

On the occasion of his 76th birthday, 24 June 1595, Theodore Beza (1519-1605) wrote a poem to his friend and fellow Swiss Reformed theologian Jean-Jacques (Johann Jakob) Grynaeus (1540-1617). In the poem, Beza, in humble spirit, recalls how a hen he bought had offered him more in the short space of a month than what he has rendered to the Lord in his 76 years on earth so far. Perhaps Beza had Matthew 23:37 or Luke 13:34 in mind when he wrote this poem, but whatever the case may be, this is a true gem. Below is the Latin, followed by my own loose English translation:

One hen gave me fifteen chicks

In one month, having earlier been bought for ten coins.

But I, at seven decades and six additional years,

What fruits have I returned to You, benign Christ?

Ah! I have not even returned to you as much as I needed to buy it,

As much value, and as much time as was needed for the cultivation of the field!

But yet I am not altogether degenerate, denying to myself

That the divine inspiration of the Lord is sown in me.

But why do I say all this? Grant this one thing, I pray, O Christ, asking: