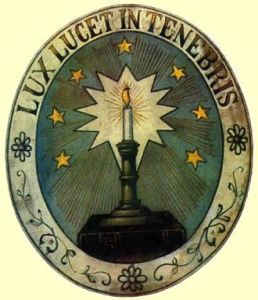 The Waldenses started as a Christian movement in Lyon, France, in the late 1170s. They received their name from their reputed founder, Pierre Valdès (Peter Waldo). In 1173 Waldo, a wealthy merchant from Lyon, heard a troubadour (a medieval poet/singer) sing the praises of St. Alexius, the patron saint of pilgrims and beggars. This song, together with the sorrow he felt for the sudden death of one of his friends shortly before, pressed on him the feeling that all his accumulated possessions were worthless. Thus he made the decision, which shortly afterwards would also be taken by Francis of Assisi, to give away his property to the poor and to those whom he felt he had done wrong, becoming an advocate of voluntary poverty in the process.

Waldo had begun street-preaching, which was simple and accommodated to the uneducated, drawing followers who became known as The Poor of Lyon. Meanwhile he had commissioned two priests to translate sections of the Bible, particularly the Gospels and Psalms, into French. His preaching, lack of theological training, and use of a non-Latin Bible, however, got him in trouble with the Archbishop Guichard of Lyon and the local ecclesiastical authorities, who forbade his activities. When he refused to obey their orders, invoking Peter and the other apostles’ words “We ought to obey God rather than men” (Acts 5:29 – where the apostles were also forbidden to preach), he was banned from the local diocese.

So he appealed to Pope Alexander III, and went Rome to explain his cause at the third Lateran Council (1179), where he was not treated with hostility, but yet was forbidden to preach without permission from the ecclesiastical authorities in Lyon. Still Waldo did not obey this verdict of the Council, and took Luke 10:1 literally by sending his followers out two by two to preach all over the place, but especially in southern France, northern Italy, and the Rhineland, establishing communities which were separate from the Roman Catholic Church. This did not go down well with Rome, and resulted in a Papal Bull (Ad Abolendam) being issued in 1184 by Pope Lucius III, which placed the Waldenses under ban, with them being condemned as heretics. This resulted in centuries-long persecution, torture, and killing of Waldenses by both civil and ecclesiastical authorities, which drove them to flee to the French and Italian valleys of the Cottian Alps.

The principal “heresy” of the Waldenses was their disregard for the authority of the Papacy, although they also came to reject such Papist doctrines and traditions as the seven sacraments (affirming only baptism and the Lord’s Supper), transubstantiation, purgatory, the holiness of relics, pilgrimages, prayer for the dead, the veneration of saints, and the use of the Latin Vulgate only, along with several others.

Importantly, the Waldenians came to their convictions by the reading of the Bible. The Dominican Inquisitor Etienne de Bourbon, wrote of the Waldenses:

“They know the Apostolic Creed very well in their mother tongue, they learn the Gospels in their language in such a way that they can recite  parts in the presence of others. I knew a young cowhand who spent but one year in the home of a Waldensian heretic, but so faithfully trained and recited to himself everything that within one year he had learned the Gospel-pericopes of forty Sundays; he could repeat it all word for word in his mother tongue.”

This emphasis on returning to the Bible as the source of religious knowledge played a key role in the Waldenses arriving at their views and rejecting many of the Popish errors. Waldo’s saying is preserved in Waldensian writer Durando d’Osca’s Liber Antihaeresis: “The church of God is always there where a community of believers is found, who uphold the true faith and endorse this by their works.”

While we should be cautious to anachronistically think of the early Waldenses as forerunners of the Reformation, some of the later Waldensian ministers were introduced to Reformed Protestant thought by John Calvin’s colleague in Geneva, Guillaume Farel. These Waldenses came to affirm the Reformed doctrine of predestination, and furthermore adapted themselves to Genevan forms of worship and church polity, and in fact were taken up in the Swiss Reformed Church at the Synod of Chanforan in 1532 to leave their secrecy and worship openly in French. Not all later Waldenses went this route, however, as many remained in secrecy in the Alps, and some developed views more akin to those of the Anabaptists. 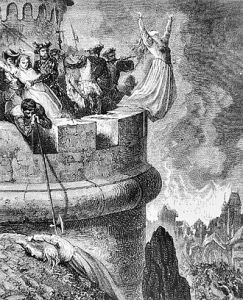 Persecution of Waldenses, as with Protestants in general, continued throughout the 16th and 17th centuries. One of these persecutions occurred with the Massacre of Mérindol in 1545, in which King Francis I of France ordered that the Waldenses be punished for religious dissent. Dozens of villages were destroyed, and thousands upon thousands of people were killed. What’s more, is that Francis I and Pope Paul III both gave the thumbs-up to this massacre, with the Pope even rewarding Jean Maynier d’Oppède, one of the leaders of the massacre, with Imperial honours. 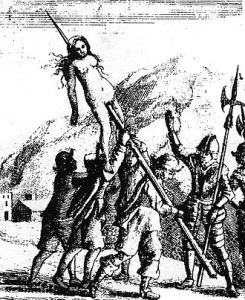 Another instance occurred in 1655, when the Duke of Savoy in January commanded the Waldenses to attend Mass or be removed from the lower valleys of their homeland, giving them twenty days to sell their lands. Since it was winter at the time,  the Duke reckoned that the Waldenses would rather choose to attend Mass than leave their homes behind. But contrary to his expectations, they instead opted to leave the lower valleys and move to the upper valleys, making the harsh trek through the Alps in the middle of winter, where they were warmly received by their impoverished Waldensian brothers in the upper valleys. By April it became clear that the Duke’s efforts to convert the Waldenses to Catholicism had failed, and so he sent troops into the upper valleys to suppress them, forcing them to host the troops in their homes, which the Waldenses complied with. This, of course, was entirely a scheme to give the troops easy access to the Waldenses. At 4 a.m. on 24 April 1655, the signal was given for a general massacre, in which the troops embarked on an unprovoked campaign of looting, rape, torture, and murder. This massacre became known as the Piedmont Easter. Peter Liegé wrote of the event:

“Little children were torn from the arms of their mothers, clasped by their tiny feet, and their heads dashed against the rocks; or were held between two soldiers and their quivering limbs torn up by main force. Their mangled bodies were then thrown on the highways or fields, to be devoured by beasts. The sick and the aged were burned alive in their dwellings. Some had their hands and arms and legs lopped off, and fire applied to the severed parts to staunch the bleeding and prolong their suffering. Some were flayed alive, some were roasted alive, some disemboweled; or tied to trees in their own orchards, and their hearts cut out. Some were horribly mutilated, and of others the brains were boiled and eaten by these cannibals. Some were fastened down into the furrows of their own fields, and ploughed into the soil as men plough manure into it. Others were buried alive. Fathers were marched to death with the heads of their sons suspended round their necks. Parents were compelled to look on while their children were first outraged [raped], then massacred, before being themselves permitted to die.”

News of the massacre was met by indignation from Protestants in Switzerland and the Netherlands, where attempts were made to provide an asylum for survivors, as well as in England, where Oliver Cromwell petitioned on behalf of the Waldenses. 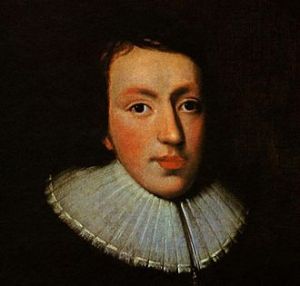 John Milton (1608-1674) wrote a famous sonnet on this event, titled On the Late Massacre in Piedmont:

Avenge, O Lord, thy slaughtered saints, whose bones
Lie scattered on the Alpine mountains cold,
Even them who kept thy truth so pure of old,
When all our fathers worshiped stocks and stones;
Forget not: in thy book record their groans
Who were thy sheep and in their ancient fold
Slain by the bloody Piedmontese that rolled
Mother with infant down the rocks. Their moans
The vales redoubled to the hills, and they
To Heaven. Their martyred blood and ashes sow
O’er all th’ Italian fields where still doth sway
The triple tyrant; that from these may grow
A hundredfold, who having learnt thy way
Early may fly the Babylonian woe. 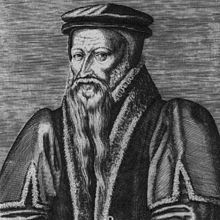 On the occasion of his 76th birthday, 24 June 1595, Theodore Beza (1519-1605) wrote a poem to his friend and fellow Swiss Reformed theologian Jean-Jacques (Johann Jakob) Grynaeus (1540-1617). In the poem, Beza, in humble spirit, recalls how a hen he bought had offered him more in the short space of a month than what he has rendered to the Lord in his 76 years on earth so far. Perhaps Beza had Matthew 23:37 or Luke 13:34 in mind when he wrote this poem, but whatever the case may be, this is a true gem. Below is the Latin, followed by my own loose English translation:

One hen gave me fifteen chicks

In one month, having earlier been bought for ten coins.

But I, at seven decades and six additional years,

What fruits have I returned to You, benign Christ?

Ah! I have not even returned to you as much as I needed to buy it,

As much value, and as much time as was needed for the cultivation of the field!

But yet I am not altogether degenerate, denying to myself

That the divine inspiration of the Lord is sown in me.

But why do I say all this? Grant this one thing, I pray, O Christ, asking: 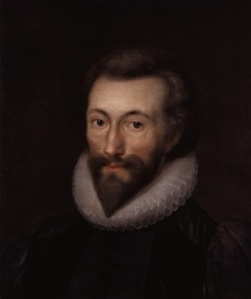 By sickness, death’s herald, and champion;

Thou art like a pilgrim, which abroad hath done

Treason, and durst not turn to whence he is fled;

Or like a thief, which till death’s doom be read,

Wisheth himself delivered from prison,

But damn’d and hal’d to execution,

Yet grace, if thou repent, thou canst not lack;

But who shall give thee that grace to begin?

Oh make thy self with holy mourning black,

And red with blushing, as thou art with sin;

Or wash thee in Christ’s blood, which hath this might

That being red, it dyes red souls to white. 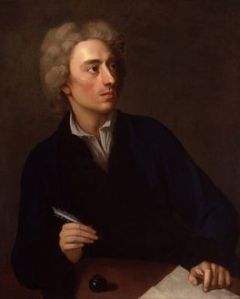 Hark! they whisper; angels say,
“Sister spirit, come away!”
What is this absorbs me quite?
Steals my senses, shuts my sight,
Drowns my spirits, draws my breath?
Tell me, my soul, can this be death?

The world recedes; it disappears!
Heav’n opens on my eyes! my ears
With sounds seraphic ring:
Lend, lend your wings! I mount! I fly!
O grave! where is thy victory?
O death! where is thy sting? 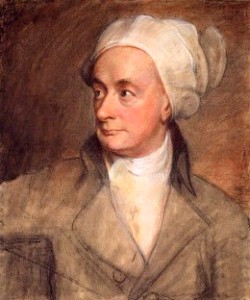 There is a fountain fill’d with blood,
Drawn from EMMANUEL’S veins;
And sinners, plunged beneath that flood,
Lose all their guilty stains.

The dying thief rejoiced to see
That fountain in his day;
And there have I, as vile as he,
Wash’d all my sins away.

Dear dying Lamb, Thy precious blood
Shall never lose its pow’r;
Till all the ransom’d church of GOD
Be sav’d, to sin no more.

E’er since, by faith, I saw the stream
Thy flowing wounds supply;
Redeeming love has been my theme,
And shall be till I die.

Then in a nobler, sweeter song,
I’ll sing Thy power to save;
When this poor lisping stammering tongue
Lies silent in the grave.

LORD, I believe Thou hast prepar’d
(Unworthy tho’ I be)
For me a blood-bought free reward,
A golden harp for me!

‘Tis strung and tun’d for endless years,
And form’d by pow’r divine;
To sound in GOD the Father’s ears
No other name but Thine.