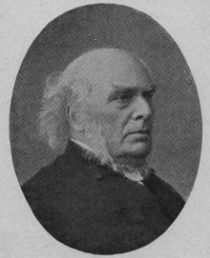 “To be entitled to use another’s name, when my own name is worthless; to be allowed to wear another’s raiment, because my own is torn and filthy; to appear before God in another’s person,— the person of the Beloved Son,—this is the summit of all blessing.

The sin-bearer and I have exchanged names, robes, and persons! I am now represented by Him, my own personality having disappeared; He now appears in the presence of God for me. All that makes Him precious and dear to the Father has been transferred to me.

His excellency and glory are seen as if they were mine; and I receive the love, and the fellowship, and the glory, as if I had earned them all. So entirely one am I with the sin-bearer, that God treats me not merely as if I had not done the evil that I have done; but as if I had done all the good which I have not done, but which my substitute has done.

In one sense I am still the poor sinner, once under wrath; in another I am altogether righteous, and shall be so for ever, because of the Perfect One, in whose perfection I appear before God. Nor is this a false pretense or a hollow fiction, which carries no results or blessings with it.

It is an exchange which has been provided by the Judge, and sanctioned by law; an exchange of which any sinner upon earth may avail himself and be blest.”